Moonlight Mirage is the unofficial book 0.5 in the Wild Crush series. Here is the story where we first meet cheeky Aussie surfer, Ty Butler, who spawned my interest in writing about surfing and second chances.

Hayley Bryant has changed a lot in the two years since her boss’s rejection sent her running. She’s 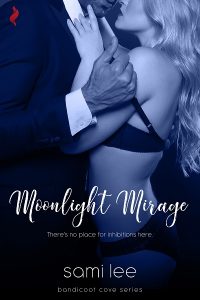 travelled the world and is now a grown woman who knows just how to get what she wants. Coming face-to-face with her former boss shouldn’t affect her at all. Except it does. Mitchell still makes her burn as hot as ever. Good thing she’s brought her sexy friend with benefits, Ty, along as a plus one to a wedding on Bandicoot Cove Island.

Mitch Wood has always put business first, except for when he hired his little sister’s friend as an intern. Pushing Hayley away was the right thing to do at the time, but he can’t deny the attraction now. This time, he’ll have to come to Hayley, and her plus one might prove to be a bit of an obstacle. Fortunately, Mitch has never been one to shy away from a little competition. 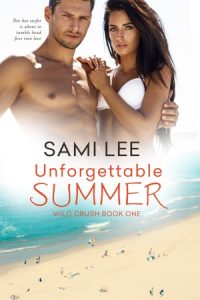 World champion surfer Ty Butler is living the good life. Success, travel, women, and an endless summer. Then a quick stop in his hometown brings him face-to-face with the only thing he’s ever loved more than surfing—Summer Campbell, the girl that got away. A decade on, and seeing her still gives him a rush. When he finds out she’s single, Ty decides it’s time to take up where they left off.

Ten years ago, Summer committed the ultimate sin of falling for her sister’s boyfriend. Ty was off-limits, so she did everything she could to forget him. Now he’s back in Leyton’s Headland suggesting they finish what they started long ago. Their wicked affair is as inevitable as the tide, but Ty’s not just a casual fling, he’s the only man she’s ever loved. Losing him once nearly destroyed her. How will she survive when the surfing tour takes him away once again? 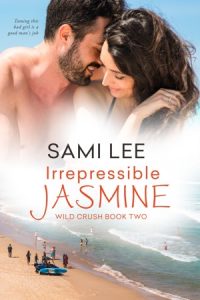 Aaron Sanderson has wanted Jasmine Campbell since high school, but as a teen, he didn’t stand a chance. Ten years have passed, and Aaron has all the confidence he needs to deal with the opposite sex. He figures he knows just how to get to Jasmine too—with an aloof demeanor and a firm hand—he just never realized how firm she’d want that hand to be.

Jasmine’s back in Leyton’s Headland and determined to make up for past mistakes by keeping her sister’s business afloat. For that, she needs Aaron’s help. A fun, vanilla fling might be just what she needs to cleanse her sexual palate after an affair with a Dom turned sour. Before long, she and Aaron are steaming up the sheets.

But once acknowledged, some cravings can’t be denied, and when Jasmine confesses her submissive desires to Aaron, he proves himself to be surprisingly adaptable. 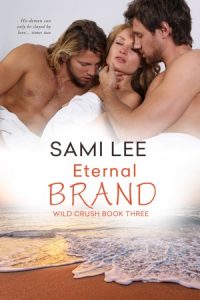 Ex commando Brandon Walker has found a semblance of happiness in his post-military life with Emily Irving, but he’s a man with many painful secrets. When one of those secrets, his former lover Jet Durante, reenters his life, Brand’s fresh start with Emily is shot to pieces.

Jet Durante has loved Brand since they were both teenagers, and he knocks on Emily’s door with the hope of reconnecting with the man he’s never gotten over. When he finds the beautiful and guileless Emily instead, at first his hopes are dashed, but then a surprising new attraction emerges.

Emily found the love she’d always dreamt of with Brand. She’s never longed for more—until Jet shows up. She can’t deny she’s drawn to him, and when she witnesses the chemistry between the two men, she sees her chance to make Brand open up at last. 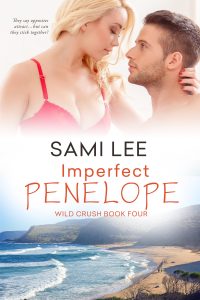 Unlucky-in-love Penny Irving can’t believe the gall of Greg Danvers. He walks into her naturopathy clinic asking for help after his louse of a brother skipped town with her rent money. Greg needs to relax all right, he’s the most tightly wound individual Penny’s ever met. She’d turn down his request for yoga lessons if she didn’t need the money. It’s only a week out of her life, she tells herself. It won’t kill her.

But the surprising fantasies she starts to have about Greg just might.

Workaholic Greg shut down the feelings he had for free-spirited Penny because she was his brother’s girl, then because he believed she broke his brother’s heart. When he finds out the truth, the attraction between them takes over. A hot affair should be enough to satisfy his pesky craving, but Penny wants a relationship, and Greg has sworn off them for good.

After a near death experience makes him reassess his life, big wave rider Dylan Wakefield returns to Leyton’s Headland to win back the love of his life, hoping to be the man to give Hope Irving everything she’s ever wanted. But Hope has moved on—with his best friend and business partner, Matt Kendrick.

Hope was devastated when her relationship with Dylan ended, and Matt was right there to comfort her. But what was supposed to be a simple friends-with-benefits arrangement has become much more, so when Dylan returns to reclaim her, Hope has a big decision to make.

As for Matt, he’s been in love with Hope for years and he’s not willing to let his chance with her pass—not even for his best friend. When Hope proposes an alternative solution, the men could balk, or give her everything she needs in the bedroom and out.