For the first time ever I set myself a reading challenge on Goodreads this year. I thought 50 books was reasonable, and it was, yay! It helps of course that I’ve hardly been writing this year, and feeling lost when I sit down at the laptop, hence giving me a great excuse to read instead. So while I usually do some kind of year in review of my writing activity, I thought under the circumstances this year I’d do a round up of my reading (which, let’s face it, when you’re a writer you can still count as ‘work’). 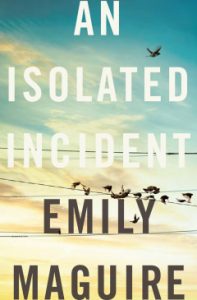 Wow. This book was a raw, heart shredding portrayal of violent crime in a small town setting in Australia. Different to many other typical mystery/thrillers, the focus is not on the whodunit, or whydunnit aspect of the murder of a beautiful, much loved young woman, but on the grief, suspicion and fear suffered by the sister left behind. As a result I think some people going into it expecting an Agatha Christie type neat wrap up were disappointed. But this book isn’t like any other that I’d previously read and I found it thoroughly engaging and very topical, given the ongoing devastation that violence against women is having on our society. If that’s a subject that interests you, you’ll appreciate this book.

The Author’s other writing page on her website is also well worth a peruse. 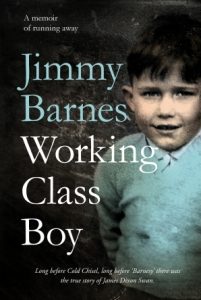 While I’m still talking about having my heart wrenched out, I could not put down this memoir of Jimmy Barnes, the Scottish-Australian immigrant brought up in abject poverty who later went on to become one of our most well known and loved rock icons. Warning, this is not a feel good book. There is so much darkness in this tale, so much sadness, drunkenness, abuse and neglect that it is sometimes hard to bear. You ask yourself ‘God, what else could there be?’, only to find that unfortunately there was more. It was a relentlessly dire existence that makes you wonder how Jimmy pulled himself out. He did, in the end, and this book closes just as Jimmy’s rock career is about to take off. That period of his life is to be covered in Working Class Man, which I’m getting for Christmas and can’t wait to read. This memoir has been compared to Angela’s Ashes and is told in Jimmy’s no-nonsense, occasionally humorous (gallows humor for sure!) style. A must read for fans.

Oh my giddy aunt. I started this book on a rainy Sunday morning before anyone else was up, intending to read a chapter or two before I got up and started my day. 10 hours later I was waving goodbye to my husband and kids as they went out to buy dinner because I hadn’t taken my nose out of this book to prepare anything. This is almost 400 pages so that’s quite a feat to read it in one day (for me), but definitely time well spent. This is a well plotted story with several complex–but not too complex–threads woven throughout and while it’s being an almost thriller/mystery, it still manages to traverse some topical, very emotional terrain including domestic violence, body shaming and the perils of modern parenting. Oh, and it’s funny too. I’d love to be Liane Moriarty when I grow up but it’s not going to happen because I think, like the Highlander, there will be only one.

I’ll be reading every Moriarty I can get my hands on in the coming year or two, but I have to prepare an easy heat up dinner first and pray for rain.

(My only disappointment is in finding that the television adaptation of this is not set in Australia like the book, and while I understand the reasons these things are done, it makes the little Aussie author in me stamp my foot a bit. If the themes are so universal, couldn’t you have set it in the damn country from where the author hails? Anyhow. I haven’t watched that because I don’t have Stan lol)

IN THE WOODS – Tana French 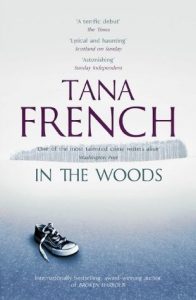 Upon reflection, this book did have some issues, but it’s hard to go into them without spoiling the plot. If you’re the kind of person who has to know the end before you start you can find the spoilers on Goodreads. Suffice to say there were two mysteries here and thriller genre convention would raise expectations that everything with BOTH mysteries would be neatly wrapped up after a solid 500 pages. The way this book ended wasn’t everyone’s cup of tea. The main protagonist, and first person narrator, wasn’t everyone’s cup of tea. I agree, he was a complete knobhead at times, and there were a couple of places where even as much as I was enjoying this ride I had to scream out a passionate OH COME ON!

However. However. There was something about this book that simply drew me in in a way I haven’t been drawn in by a mystery in a very long time. I think it was that this story was as much about the intense and close friendship between the detectives Rob and Cassie, and the author’s complex insights into their lives as it was about the present or past mystery. The setting was so well drawn I felt I could have been there in the streets of rainy Dublin or in that open field abutting the creepy, haunting wood that both attracts and repels Rob. While there’s nothing here that’s really deeply original (and yeah I did know whodunit, or at least strongly suspect, very early in the piece), it’s like being told a vaguely familiar ghost story by someone who knows how to bring magic to the otherwise mundane aspects of it. It is heavily detailed, and long, but I wasn’t bored for a second. Truly did just love reading this and will follow the Dublin Murder Squad along on more adventures for sure.

INTO THE DARKEST CORNER – Elizabeth Haynes 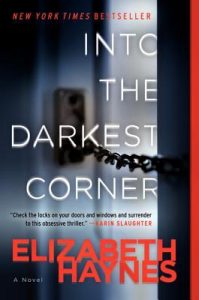 It was so hard to settle on the final of the five because there were several I liked equally as much. I’ve chosen this because I thought the past/present narrative structure was done just right, when it’s so often done oh, so wrong. Here you were equally invested in both timelines and they came together in a way that revealed just enough information in each timeline to keep you guessing, no mean feat considering there was no real mystery, not in the whodunit sense. This was a vivid, brutal portrayal of a horribly violent relationship, entered into by an intelligent woman with friends and a job…in other words an average, attractive young woman who had self-confidence, not a shrinking violet, nor a self-destructive type hopelessly attracted to bad boys. So often stories about domestic violence take this route, as though something must explain how women end up with abusive men. This book took pains to show us that absolutely any woman can be drawn in by a master manipulator. And when the MCs friends don’t even believe her because her boyfriend is ‘so perfect’ it’s in equal parts frustrating (fucking shitty friends!) and entirely believable. People want to believe the image that’s presented to them. They don’t want to think that they’d be fooled by a total and utter bastard control freak. But people are, often. Smart people are fooled all the time and this book reiterated that. Anyone can fall into a relationship like this and due to the loss of control in their own life, find it almost impossible to extract themselves.

I also appreciated how the aftermath of ‘getting out’ (or did she…?) of such a relationship was portrayed by the MC’s crippling OCD.

HONORABLE MENTIONS because gah, it was so hard to pick that last one!

The Missing One – Lucy Atkins

Fools Rush In – Kristan Higgins (my only standout romance read this year, I swear I’m just disillusioned, no one’s fault. But Kristan does know how to pull me out of the doldrums and this one did make me laugh a lot)

So yes it’s been a big mystery/thriller year for me, as you can tell. But I did read several women’s fiction novels that I enjoyed, they just weren’t as engaging for me as the thrillers. I also read two bucket list books of mine, The Bell Jar and The Complete Poems of Dorothy Parker. Oh and Postcards from the Edge by Carrie Fisher. I even read a book with magical realism in it (new experience for me!). So I feel that I’ve broadened my reading horizons this year, which was what I wanted to do. I’m happy with my eclectic choices.

What will next year bring, I wonder? Have you read anything this year that stands out as a favourite?