I never read comics when I was a kid. My introduction to Wonder Woman was the TV show starring Linda Carter that I used to LOVE. I was in awe of this version of Wonder Woman, with her golden lasso and wrist bands and her ability to change clothes with little more than an elegant twirl. I never thought much about the outfit itself, other than it was bright and sparkly and the boots were to die for. Even as I got older and I understood what made certain women attractive to the opposite sex, Wonder woman still existed in this dreamlike state characterized by childhood innocence. I thought the universal popularity of the character had everything to do with all the shit she got accomplished and not anything to do with how she looked. 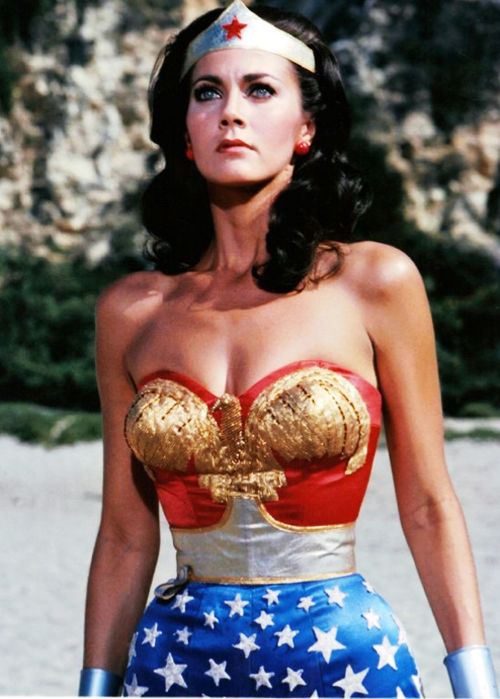 Saving the world requires more support than this, just sayin

I remember the first time as an adult I heard some guy make a suggestive remark about the WW’s outfit. I realized that guys found the character sexy and this actually floored me. I had one of those ‘duh’ moments that fill you with a mixture of shock and embarrassment, because it was so obvious in retrospect. Of course WW was sexy. That outfit was all about showcasing the T&A. There is absolutely NO logical reason why a superhero would wear what amounted to a bedazzled swimsuit to chase down bad guys. The clothes would have been more a hindrance than a help. So why, if she was so magic, didn’t Diana Prince change into a pair of camo pants and combat boots?

Well, for the boys of course. Duh. The strapless, risqué-for-the-time, overdone togs were for the boys. 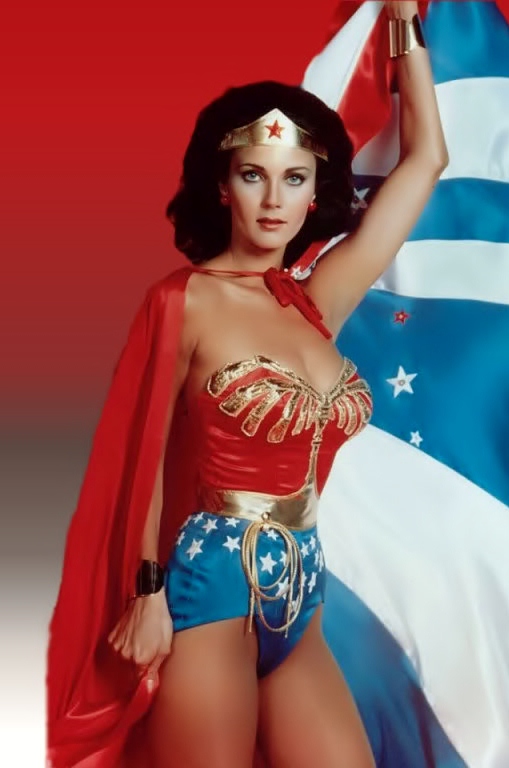 This is what we call the ‘male gaze’. I saw my childhood hero in a whole new light. I saw her the way men saw her and I couldn’t help but feel her power and strength were diminished by this viewpoint. When looked at through the male gaze, wonder woman was little more than an object of pleasure, a sex symbol, fuel for teenage boys’ fantasies. I’m not saying no heterosexual boy ever would have appreciated the stuff WW could do, the cool toys she had like the lasso and the plane (ok the plane was actually pretty dumb). Boys probably did appreciate those things too. But then again… boobies.

I’m not blaming the boys of my era for this. Not even the male directors, writers and producers are really to blame perse, because a world in which their pleasures came first had been handed to them and if a world where you own everything and get to make all the decisions to suit your needs is handed to you, you just don’t question it. You don’t naturally think to ask, ‘hey, do any of you blokes know if the women are happy and fulfilled and feeling respected?’. No. You just take one of those women and put her in a show in such a way that you and millions of others can perve on her and never think for a moment that it might not be the best experience for her, or that it might not be teaching young girls or boys to value what women have to offer besides sex appeal to straight men.

It happened that way, people. Let’s not argue about whether male dominance and the male gaze are things that have diminished the worth of women for centuries, mkay? It was, it is, it’s changing (too damn slowly, but whatever), but let’s move on for now.

Because now, there’s Wonder Woman 2017. Now, I want to talk about her.

I’d been anticipating this movie for a long while with a mixture of hope and trepidation. I wanted so badly for it to be good, for so many reasons. To prove that a female led superhero movie could be just as successful as one starring a male superhero (check). To prove that female directors were just as good at directing action films as men (and why wouldn’t they be? Why is that a question?). And to just please God avoid that bullshit where film execs blame the failure of any female led movie on the fact that it is female led and not on their own failure to put the film together in the right way.

Wonder Woman does all these things, but for me it did even more. It did something unexpected. It gave me back my childhood hero, the one who was amazing without having to be a sex object to get noticed. Not that Gal Gadot is not sexy. She is for sure. So much so that the camera didn’t have to tell us a hundred fucking times that she was. Her outfit showed some skin, sure, but it was functional. If she looked hot in it that was incidental, not the whole reason for the outfit. Gadot reminded me how I used to feel about Linda Carter back in the day. Like she was a strong woman I could admire and cheer along. She was a role model. A hero.

A lot of women online have admitted to shedding tears as they watched  WW storm into No Man’s Land with nothing more than her shield and her awesomeness to fend off a hail of bombs and bullets. I admit I teared up myself. Why? Because, while she is unarguably a beautiful woman, there was no requirement in this scene for her character to look sexy while she kicked ass. Her looks were not the focus, her power and determination as a character were. She literally lead the men into battle and she slayed. She fought and won and never once had to be saved by a bigger, stronger man. This must be what it’s like thought I and millions of women all over the world, when men get to watch other men get shit done without having to flash their assets at the camera or turn to someone else for help. 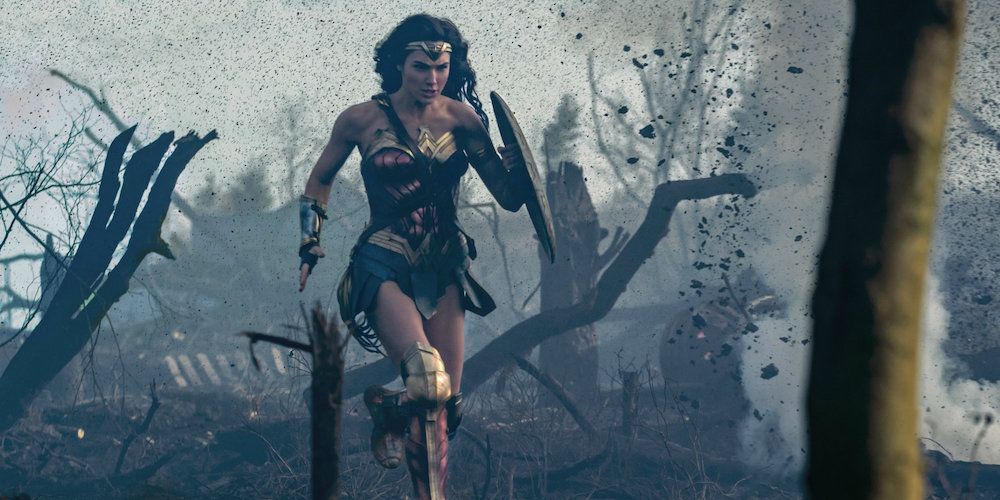 THIS. ALL OF THIS

The whole movie was like this. I kept nervously waiting for that scene we’re so used to seeing, the one where the camera pans up the actresses body in slo mo, a little saxophone music playing in the background in case we don’t get the hint. The scene were the hero walks in on her naked in the shower and everyone (read: all the guys) guffaw and live a little vicariously through him. No scenes like that, just a movie about a woman who was better at doing all the shit than all the men in film and didn’t apologise for it or make herself smaller to make all the guys feel bigger. A film where her feminine characteristics, like her faith in love and her empathy for others, proved to be strengths, not weaknesses. A film that took no cheap shots, and allowed all the supporting male characters to also be strong and fully rounded. The relationship between Diana and Steve was perfect. He was surprised by her powers at first and repeatedly, but we never saw him be intimidated by them. He didn’t carry on like a whiny baby because he wasn’t the star of the show/conflict/war/scene. He was good and he knew it. Diana was better and he knew that too and was just, like, ‘okay you do what you’re good at and I’ll do what I’m good at and together we’ll win this and my manhood is just fine, thanks very much.’ 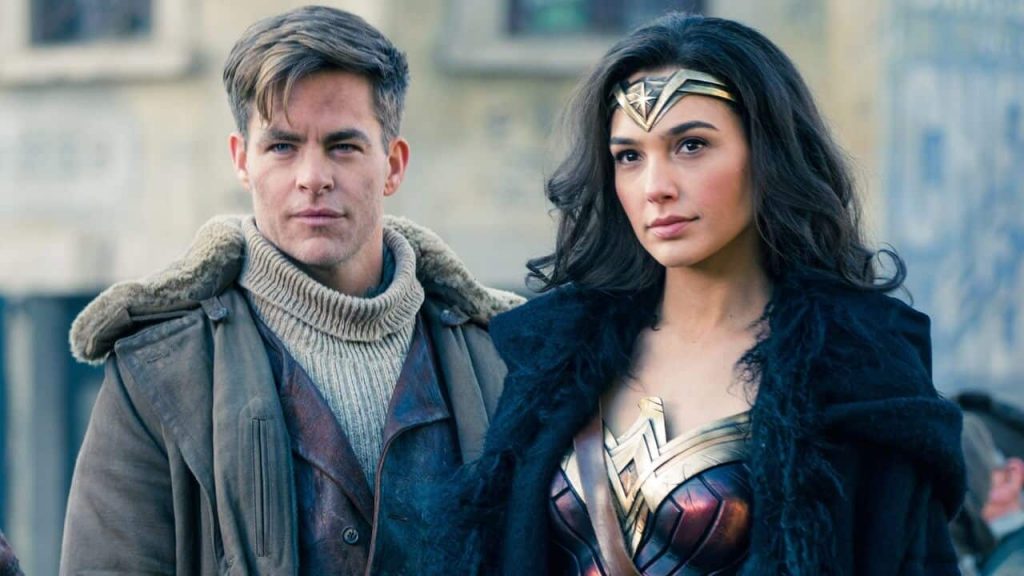 This is why so many tears have been shed. Because this kind of equality in an action movie–hell, in any movie really–is so god damn rare despite women asking, asking, asking for it all the damn time that when we finally see it it’s the best kind of wish fulfillment that you never thought you’d have. This is what we want. Women doing stuff. Blokes doing stuff too. Everyone working together and looking EQUAL.

Yep. It only took a movie about a woman who is an Amazonian God Warrior to show some real equality up there on the screen. I could say a lot about how that proves the long history of vast inequality between male and female characters in cinema, that it took superpowers to redress the imbalance, but I won’t today. For now I’m just going to bask a little in Wonder Woman’s God like brilliance and hope it rubs off on us mere mortal women in time.