unwilling to work or use energy.
characterized by lack of effort or activity.
showing a lack of care.

I have a kid who is brilliant. Clever, articulate, stellar memory. Academically and emotionally intelligent. A real big picture thinker. When I have interviews with her teachers the vast majority of comments are positive. The only problem has ever been sometimes she doesn’t hand in her homework, or she doesn’t finish her work on time. She’d probably be the best in the class if she learned to work more efficiently. Just get the job done instead of letting herself get bogged down in details. I nod along knowingly. She does love to leave everything to the last minute. Why put off until tomorrow what you can put off altogether, right? It drives me batty. “You’re so smart,” I say. “Why can’t you figure this one thing out? Putting things off creates unnecessary stress. Just get the homework done first and then you can watch TV.” But no. My brilliant kid loves nothing better than to lie around like broccoli, binge watching episodes of How to Train Your Dragon and The Worst Witch.

At the last interview I heard myself saying something I’m not proud of. “She’s really switched on when she wants to be, but she has a lazy streak.”

Yes, I said this, and I don’t really know why. I was frustrated to learn that she wasn’t reaching her full potential, not because she’s not up to the work but because she just can’t always be bothered. Aka: Lazy. Right?

But I think, actually: Wrong. 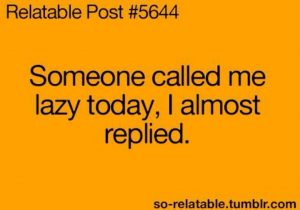 The other day, 6 months after this encounter, I had an epiphany about myself, my own academic past. At school the most written complaints on my reports was that I spent so much time day dreaming that I rarely finished my work on time. I didn’t apply myself. I needed to work faster. Aka: I was lazy, although of course that word was never used. This was a truth about myself I’ve always accepted. That when I get going I’m great but I have a mile-wide lazy streak I have to jump over first. I’d rather binge watch TV or read and usually chose this over a better grade or the praise of my teachers.

But you know what this epiphany was? All those hours I spent locked in my room listening to music or reading, all those mornings I struggled to get out of bed, all those invitations to social gatherings I avoided because I’d rather read, I wasn’t lazy. I was depressed. I was having a difficult time emotionally and with my newfound knowledge of the vast fuckedupedness of the world. I was weighed down by the idea that there wasn’t any point. To anything. I was nihilistic. I hated most everything except books and movies. These things allowed me to escape the dark circular thoughts that took me down and down and down. They were life rafts.

Is it any wonder I’d rather read than do my homework? That I left everything to the last minute? I was too busy extracting every ounce of strength I could from the stories that showed me maybe there was a point, after all. Maybe not all hope was lost.

I wasn’t lazy. I was sad. Lazy people don’t go on in later life to get degrees, or write theses, or books, let alone 20 of them. Lazy people don’t do that writing while also taking care of a family and working outside the home and trying to get their allotted exercise in too. I’ve never been lazy. But I am a perfectionist. If I do something I want to do it right, so before I start doing a job I know it’s going to take me longer to do than it should. Because I’ll get bogged down in the details, or I’ll spend half an hour finding the exact right word to use. This isn’t a choice. Believe me if I could be less this way, I would be. I’d have written twice as many books if I could just dash them off and say near enough is good enough. I’m ‘lazy’ between novels or chapters, because I need to reboot, to gather my strength for the journey ahead.

My kid’s like that too. When she decides to give something her all, she gets obsessive about doing it right, and despite her general competence and the dedication she puts in, she’s rarely happy with her finished product. It’s not particularly healthy and won’t likely serve her well in this fast-paced world, but she can’t be any other way. I ought to know. She’s going to need my help and my acceptance, but she’s fine. Or she will be–as soon as she learns she has to accept herself. She’s a good kid, and she’s doing her best. As am I. 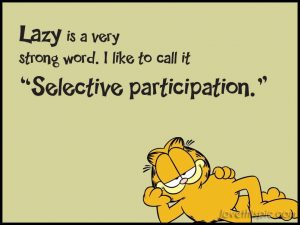 Frankly this has all got me rethinking how the word lazy is applied in all contexts. Is it really lazy to go on a beach holiday and do nothing but lie by the pool if you’ve spent the preceding year working your butt off to get your business set up or make partner? Or is it simply a necessary recharge? Is it lazy to want to lie in bed all day, or is your mental health suffering? Is calling yourself lazy for watching a couple of hours of TV just an unfair self-criticism that self-perpetuates the problem? Lazy seems to be a value judgment that others place upon us, or worse, we place upon ourselves.

I caught myself this morning. “You’re being so lazy,” I said to myself, because I couldn’t get motivated to edit that chapter I was going to edit or write any new words. This morning I did half hour of yoga, two loads of washing, I vacuumed, including the couch cushions, and mopped the floor. Before the day’s out I’ll cook, fluff and fold that laundry and put out whatever fires need putting out while I’m at it. I’m not lazy. The truth is I woke up this morning feeling intensely sad. I’m sad, and forcing words when I’m inexplicably sad like this just doesn’t work. My inability to ‘get it right’ will only make me sadder and right now that’s something I can’t bear.