I’ve always bought books. From a young age I would save up pocket money/birthday money and spend it on books. Some new, many from my frequented 2nd hand bookstore. I discovered Harlequin novels at my local Kmart, purchased my first because it was a fraction of the price of the Leigh Nichols supernatural suspense novel I was also eyeing off (Leigh Nichols, I later discovered, was a feminine nom de plume for Dean Koontz). Look what that one little purchase started.

I’ve also been using libraries extensively since I was a teenager. At high school the library provided a safe haven from playground antics I sometimes wanted to avoid. I’d not even read the books often, because they didn’t have what I wanted to read (Lord of the Flies, anyone? NO OF COURSE NOT). However, they did have atlases, informative non-fiction books and places I could hide when I needed to. I liked walking around the shelves and reading the spines, peering through the gaps between shelves in case anyone I didn’t want to see showed up. Bookshelves are great cover and allowed me to escape if I didn’t feel like talking. I was more introverted then than I am now. Some called it shy. I called it painfully anxious and socially averse, but potato, potaahto.

Later, after I was married, we moved around for work reasons a bit. The first thing I’d do in each town (okay maybe the second thing after finding the best pub) was join the local library. I’ve never lived in any place and not had a library card, even if we only lived there 6 months. 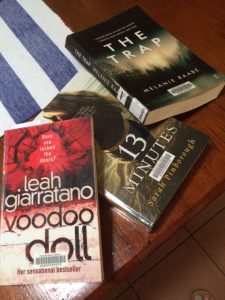 most recent library borrows – on a crime kick, obvi

So while I spent money on books when I had it, I discovered so many much-loved authors from library borrows and 2nd hand sales. I usually went on to purchase books from these authors, if/when I had the money and I wanted the latest, but not always. I’ve enjoyed several of John Grisham’s books, but I don’t think he’s earned a cent in royalties from me. Honestly? I don’t like him that much. Sue me. Ditto James Patterson, who I did get bored with after 3-4 books which were all quite similar. I mean, they’re both doing fine, so whatever. I don’t owe them anything because I liked a couple of their books years ago. Borrowing from the library is both a legal and perfectly acceptable way to read books (for which the author does in fact earn a royalty), and you NEVER have to purchase a book by that author if you can’t afford to, or even if you can afford to but you just don’t wanna. That’s your right as a reader.

(Obviously, authors appreciate it when you buy their books. ENORMOUSLY. But if you use legitimate methods to get them free or cheap, that is OK. It is also much, much appreciated)

Nowadays my reading habits are thus: about half of all I read comes from the library. The other half is made up of purchased books, some established authors some new authors because I like to roll the dice and put that good mojo out there. If I take a chance on a new-to-me author, maybe someday someone will take a chance on me, too. Literary karma. I still buy occasionally from 2nd hand bookstores when I find them, but they’re much rarer than they used to be. And I download ebooks when they are free or cheap to try out a new author, or even if it’s an author I already know I like and I see their book on sale—click click. They make little or no royalty from that, but they want you to read them and maybe buy other books from them if you’re so inclined. I’ve done first in a series freebies or sales plenty of times myself. Authors, more than anything, want to be READ.

NOTE: I want to make a point about the chances I take on new-to-me authors. Some of those risk books don’t turn out well. I might blow $10-20 on a paperback I turn out to hate, or $5 on an ebook I don’t end up finishing. Do I get mad? Disappointed maybe, but not mad. Why? Because of all those great books I got to read for FREE or SUPER CHEAP because I got them at a library or in the bargain bin at a local newsagent or 2nd hand book store or someone lent it to me. I figure it evens out. Like the movies. Sometimes you go see something at the cinema and it turns out you coulda waited for the Netflix version, but what the hell. It was an experience, right? It coulda been great and just because it wasn’t doesn’t mean you never go to the movies again. 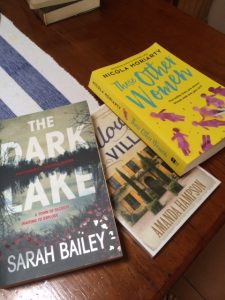 So, it’s precisely because I get so many great reading experiences for no money down, that I am willing and able to put money down on an author I’ve never heard of or read before. For me, libraries encourage future purchasing. Not only do libraries provide safe haven for the introverted or bullied, community for the lonely, free shelter from the rain, air conditioned seating when it’s sweltering hot, an untold wealth of knowledge courtesy of your book-loving librarians, a place to write away from the distractions of the internet when you need it, a vast catalogue of books and so many other things, their very existence reinforces the idea that reading and knowledge sharing is valuable. If the community in general doesn’t see reading books as valuable, that’s when we run into big problems. It’s why the Nazis burned books, because they understood the inherent value of stories and knowledge and they wanted to quash those things.

I’m ranting now. About Nazis, because they seem to be on my mind lately FOR REASONS. Suffice it to say LIBRARIES ARE GREAT and anyone who comes up to me and tells me they borrowed my book from the library is going to get a huge thank you. If someone came up to me and said ‘I’ve read every one of your books and I got them all from the library’, I’d be like ‘oh my god you read every one of my books? That’s so awesome!’

Anyone, anyone, who would turn to that person and say, or think, ‘buy one of my books then why dontcha you can’t keep freeloading here’ is a rude motherfucker. That is a GARBAGE thing to say. Fuck that person. Not everyone can afford to buy books, and even if they can, THEY HAVE EVERY RIGHT TO BORROW YOUR BOOKS FROM THE LIBRARY. Be thankful they even read you at all, because they could easily read someone else. There’s a lot of choice.

It’s not that hard.

(PS yes pirating is VERY DIFFERENT and could take up a whole other blog post, but in short: don’t go up to an author and say you downloaded their book from a pirate site because that will make you the rude motherfucker, mkay? if you’ve done that, well we’d all rather you didn’t, but if you did it already don’t DOUBLE DOWN and tell the author you did it. Just. Don’t).