So  I’m taking some weeks off the day job. For reasons including

This has caused some disquiet in the household. Namely (and only) with my rather intrepid 8yr old who decided to point out that it’s ‘so unfair’ that I get ‘so many days off’ while she and her sister have to go to school and Daddy has to go to work and is ‘SO BUSY’ while I’m, presumably, sunning myself by the pool drinking margaritas and thumbing my nose at the man, enjoying being a lazy assed neglectful parent and a drain on society (not her exact words, but she has a very expressive face). 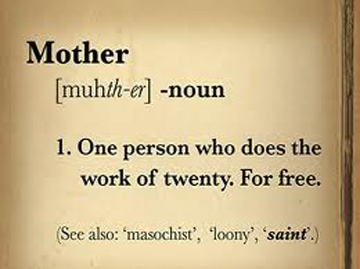 I realise now that as a working mother I have inadvertently blinded the cherub to a few home truths. By driving off regularly to a day job, where I had to put on big girl pants and make up and wrestle with traffic and bosses and the like, I seem to have given her the impression that those three days of the week while I was at the office were when I did my hardest work. Were when I was most stressed and pressured. Not only that, but she seems to think that was the ONLY time I was actually busy.

Nothing could be farther from the truth. As most working mothers will know, the office is where we go to have a rest from mothering. Even a busy office, with its ringing phones and cubicle politics, provides a welcome respite from the 24/7 on call nature of parenting. At least at a job there is structure, a clock on and off time, a lunch break if you’re lucky and the possibility of some adult conversation. A chocolate cake when it’s Karen’s birthday–one you didn’t have to cook and decorate with pipe-iced characters from Frozen. It might suck but there are days (anywhere from a few to many) where it sucks less than picking up dirty socks and being asked to adjudicate over the ownership of certain Lego pieces. It sure as shit sucks less than doing the dishes.

But somehow my daughter has gotten the impression that when I’m at work I’m busy, I’m productive and useful, whereas the rest of the time I’m not. I’m having ‘days off’. This says as much about how I have taught her to value what I do as a mother as it does about her lack of understanding about how hard it is to be a writer. Because I was fulfilling both those roles to my fullest capacity for many years, as well as holding down an outside the house job and in my superhuman way (lol), I must have made it look easy. Normal.

Perhaps I should have complained more about how hard things were, because by making my hectic 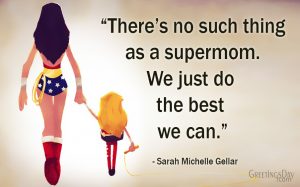 life of before, with its 5am writing sessions and Sunday afternoon batch cooking efforts and night time social media appointments and folding-washing-while-I-helped-with-homework multi-tasking, seem normal, I’ve made her think it WAS normal. Hell, I thought it was normal for years, until I suddenly hit the inevitable wall and couldn’t keep it up. Now when I look back I can see I was burning the candle at both ends, but at the time I just did what I had to do. What I know many other working mothers do. It’s hard and exhausting but we do it.

Well, until we get sick or something, which is nature’s way of saying STOP IT FFS YOU’RE NOT A CYBORG YOU NEED REST.

I didn’t get physically sick, although I did develop some mysterious stomach aches that never could be diagnosed despite several medical exams. My doctor suspects appendicitis. The hospital said I ate bad sushi (snort). I wonder if I was giving myself an ulcer. In any event, I’ve slowed down and the random pains seem to have gone away. Now I just have to deal with the mental lethargy that comes after having an almost breakdown, mid-life crisis, bout of depression thingy (not the medical term).

Now I’m doing what I can do and accepting that whatever that is has to be enough. That means I don’t get up at 5am to write anymore — at least not right now. I don’t have the mental energy for it and I have enough restive hours between 2-4am (thank you premenopause! And Donald Trump. I also blame him for stress induced sleeplessness). Sometimes the heaviest sleep I get now is just after 4:30 and before 6 and I’m taking it. I need it. It means I need to take some time off my day job so I can figure out if I’ll EVER write productively again.

So this year, 2017, was always going to be the year I figured things out. It’s crunch time with writing. Can I keep doing it or should I throw in the towel? Buy that coffee van I’ve always threatened to buy, park it by the beach and be done with it (In Imperfect Penelope, I had my hero Greg ponder the same future career choice lol).

The coming months will tell the tale. Wish me luck.

(ps anyone want to write sprints?) 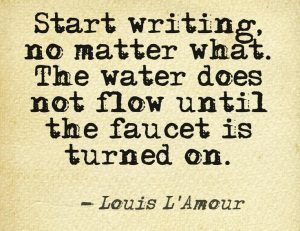