I’m delighted to announce that Erica’s Choice, which was previously published as a standalone novel, has now been rereleased as book 4 in the Ashton Heights Fire series (a prequel). You many have already read this one, but if not, now’s the time to discover how the entire series was inspired! Corey, Griff and Erica’s story is a smoking hot MMF menage that probably shouldn’t be read in public. I’m hoping all the 96 Amazon reviews the book received in its previous published life will soon be transferred over to it’s Amazon page. In the meantime, there’s still plenty of opinions available on goodreads. 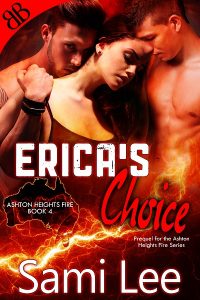