I’m so thrilled to share the new cover for my novel Erica’s Choice! This is a rerelease of a previously published title, which is now finding its rightful place amongst my Ashton Heights Fire series along with Burning Up, Giving Off Sparks and Hot In Here. 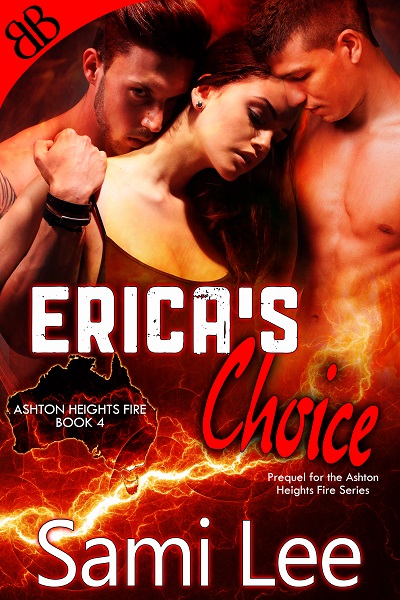 The journey behind Erica’s story, if you don’t already know it, is rather long and winding. Back in 2009 I was hit by the first time ever by writer’s block. I had just started to make a little bit of a name for myself writing erotic romance with the Sunset series, and suddenly a world of possibilities seemed to open up for me, creatively speaking. Sounds like a great thing but after years of trying to write to requirements (I spent many a year trying to fit my voice into a Harlequin style shape and it wasn’t working out), the idea that I could write whatever I wanted was daunting. The freedom to take my writing in any direction I chose, perversely, made me freeze and not know what to write. A month of indecision and dithering over writing this manuscript or that turned into two months, then six. We bought a house and moved, family life took over (I allowed it to, really) and before I knew it, it had been 2 years since I had written a complete story. I was writing maybe a hundred words every other day and curling into a ball, unable to face the computer, when I wasn’t trying to bash out some words, any words. It was a rather nightmarish time. I began to wonder if I’d ever come out of it. If I’d ever write again.

Then I decided to give myself permission not to write for a while. I read instead. Notably, Stephen King’s On Writing which helped me realise the writing process, and business, is different for everyone. I didn’t write like the authors of all the other writing advice books I’d read. I wrote like Stephen King–in a kind of subconscious haze of words and ideas that I had to pluck from the ether and somehow transfer onto the page. It wasn’t linear and it didn’t always make sense. I couldn’t stick to an exact word count per day, but I could stick to one story and write it down, come what may. So I did. I picked up a notebook and pen and began to write what was supposed to be a short, hot story about two men and a woman. It turned out to be much longer and more involved than that of course, and after a year of writing, rewriting, submitting, rejection and resubmission, finally Erica’s Choice was accepted for publication with Samhain.

Erica became my most successful book with that publisher and it went on to spawn a spin off series called Ashton Heights Fire. Now the rights to Erica’s story have returned to me and Book Boutiques is reissuing it as book 4 in the Ashton Heights Fire series, a prequel to book 1.