I have not read any of the 50 Shades books, except for some excerpted passages that didn’t inspire me to read more. I’ve never much been into the billionaire/innocent virgin trope (read: I hate it and all it stands for). But each to their own I always say.

I have not seen the full 50 Shades of Grey movie, but I have seen parts of it whilst drinking wine and flicking through the TV channels. And I have seen the full 20+mins of cinema sins breakdown of it, on which I base my very informed opinions of that flick.

Note: I’m a lot more chill and philosophical about this now. Lightning strikes where it will and you can’t control that. It’s cool, it’s cool. I don’t even care anymore if, when people find out about my writing, they ask the inevitable ‘oh so your books are like 50 Shades of Grey?’. Well, I don’t care much anyway).

I went to see 50 Shades Darker because it was a night out with a couple of girlfriends and I’ll do anything for a night out with people I like. So I went into the cinema expecting to spend 2 hours stifling my groans of pain as I watched cliché ridden ‘romance’ between two cardboard cut out characters meander listlessly across the screen.

What I got instead was a new girl crush. Dakota Johnson. 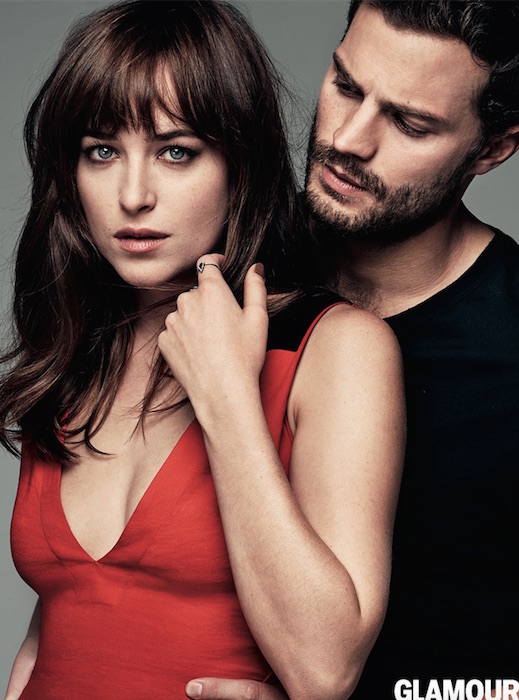 Ok so she’s a pretty thing, but what Hollywood actress isn’t? There’s something about this woman’s face that makes it hard to look away. I think it’s her lips. They’re an unusual shape, almost heart shaped. Probably why Christian is so obsessed with how she bites them. But anyhoo, it’s not her attractiveness that makes her appealing. It’s the sense of humour I see buried beneath the surface of what is, let’s face it, some pretty bad and overly serious material. My impression of Anastasia’s character prior to this movie was that she was an insipid little kitten who swoons in Christian’s presence but doesn’t understand how vanilla she is and how vanilla he’s not, so when she finds out she runs crying from his penthouse and vows never to visit the sexual Baskin and Robbins that is Christian’s red room of pain ever again.

But the Anastasia in Darker is much stronger than that. She knows where her boundaries are now, but isn’t afraid anymore to let Christian cross over them–when she allows it. She’s cheeky. She’s funny. She stands up for herself. She defiantly does things her way without coming across like a spoiled brat. She is, in short, a match for Christian in every way, which makes me feel so much more comfortable about the billionaire manwhore/sweet virgin dynamic we have going here. Ana even makes fun of Christian at times, like in this little exchange.

Christian: My mother was a crack whore

Ana: Why didn’t you tell me?

Christian: I did, but you were asleep at the time (JAY-SUS CHRISTIAN)

Ana: One of the most important elements of communication, my dopey man-boy spank machine, is that both parties are conscious

(I paraphrased a little)

Dakota seems like she’s having fun playing Ana, like she knows the source material is questionable but she’s all a like ‘I’m getting paid a shit load of money to wear pretty dresses and pretend to have sex with a billionaire, this is AWESOME”. 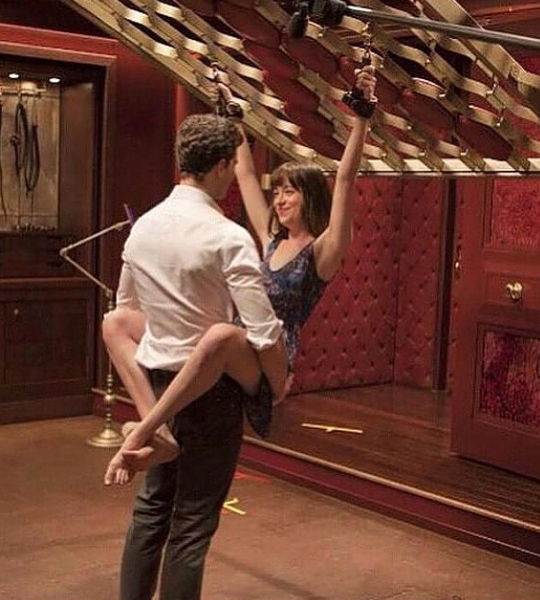 Because hell, wouldn’t it be?

This girl knows she’s hit the jackpot, and she knows she’s got it going on. She has instilled in the character of Anastasia a strength and humour that I sense was lacking from the books and the first movie. When Christian presents her with a pair of silver vag balls (well, they’re probably platinum because HELLO he’s got more money than sense), she eyes them dubiously and tells him unequivocally “You’re not putting those in my butt”. 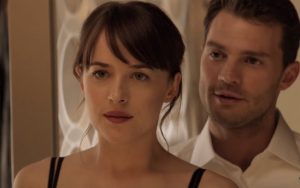 Balls in the rectum? HELLS TO THE NO BOYFRIEND

I love that she knows her BF is just the kind of disturbed MOFO who would want to do something like that even after he’s promised he’s going to try vanilla ice-cream for a while, and that she’s having none of it. But in honour of her newfound willingness to stretch her boundaries (so to speak) Ana lets Christian put them in her twat and escort her out for an evening spent looking like she’s almost ready to blow a gasket because whenever she moves Christian’s platinum balls make her wanna orgasm or something. Maybe the expensive balls are better, because I tried it with the vag balls a loooong time ago and let me say OUCHIE, no way thank you. But. Each to their own.

The whole movie runs like a 2 hour long cologne commercial, but the directors cut where someone’s suddenly got a spreader bar out and wants to fuck you because the cologne has traces of airborn Viagra in it. So no, the movie is not great, and Jamie (poor Jamie) Dornan plays the part of uptight asshole spank monkey with all the enthusiasm of an uptight asshole who doesn’t know how good he’s got it. He looks so freakin’ awks the whole time, that you just know he’s not on board with Dakota’s ‘This is hilarious and so much fun, lighten up!’ attitude.

lighten up Jamie, we’re getting paid to sail on a boat 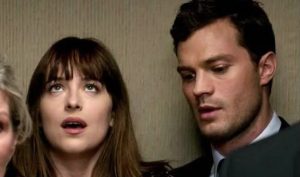 And then, THEN, there’s a part in the movie where Ana has just been promoted to a senior position in a publishing house at the age of 24 because her former boss got rapey with her and so Christian bought the company and fired his ass (SUCH RELATABLE PLOT ELEMENTS), and her former co-worker is now working for her and confesses she has no idea what to call Ana now and Ana says:

I expect you to call me Ana. I don’t expect you to fetch me coffee unless you’re getting one for yourself, and the rest we’ll work out as we go.

Which aficionados of 80’s cinema will tell you is a DIRECT QUOTE FROM WORKING GIRL Y’ALL, a line originally delivered by Melanie Griffith’s character Tess. Melanie Griffith is of course Dakota’s mother, so this was no slip up. This was an in joke that I know for sures can’t have been in any of the books, so Dakota, the cheeky minx has worked that in on her own for a chuckle. She probably had to ask mumsy, whose disdain for the first film was so painfully obvious, to let her use it. So what chutzpah, Dakota. My giiiiirl.

(Melanie was probably all like ‘I’ll let you use the line if you stop showing your nips up there’ and Dakota was like ‘No way my nips are gonna win an Oscar one day because they’re better at acting than Jamie Dornan’). 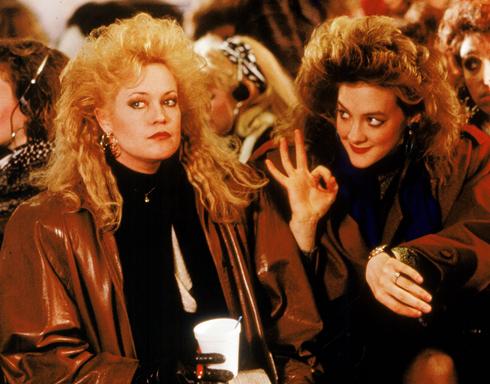 If Dakota manages to work ‘I’ve got a head for business and a bod for sin’ into 50 Shades Freed, I’m a fan for life.

So to sum up, I was surprised by how much fun this film ended up being, fun which I directly credit Dakota Johnson with providing. I predict that she will not let her involvement with this franchise define her. She won’t just be another girl next door character who ages out of that role and then doesn’t know what to do with herself. She’s got more moxie than that. She also has talent, and smarts, probably from being around this industry her whole life. I forsee some edgy indie movies in her future, maybe her own production company. Anyone who can turn a 2 dimensional wuss like Anastasia Steel into a complex, layered and entertaining character is going to go a long way in life.

And she really knows how to rock the red lippie.

As for Jamie… Poor dude needs to chillax. Not everything you do will be Shakespeare, JD. I know you’re playing a douche, but you don’t have to be one. 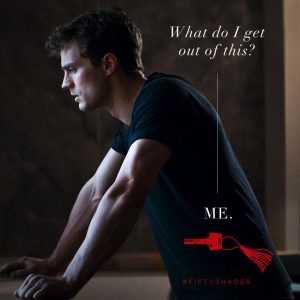 Sure that makes everything worth it. Fuck knuckle

So I surprised myself by having fun with this. Wonders never cease.

3 thoughts on “For the Love of Dakota”