This is Us, a pretty good show with relatable characters dealing with intense, but believable, family dramas. I loved the first episode. Enjoyed the second. The third… meh. It’s good but not great in my opinion. So shoot me. I’ll keep watching it because it IS good, just not up to the amount of hype it’s been getting. I think everyone is just so excited there’s a good show on that has no zombies, murderers or otherwise depressing and/or gross situations in it. And I am too. We need all types. Bring on the family dramas, I say. I want more.

But for now, I’m going to talk about something that bugs me. Or someone. Toby. Fucking asshole Toby.

There’s an insidiousness to Toby’s character that I don’t trust, because he comes across as a fun guy. He’s easy to talk to, has a great sense of humour. He’s a great foil for Kate, who takes herself and life a bit too seriously, is perhaps borderline depressed. I was with him in episode one. But then in episode two he started pressuring Kate for sex. This made me a little uncomfortable. He goes in for the move and Kate says no she’s not ready. His response was more or less, ‘we’ve been on XXX amount of dates, what did you think my intentions were?’. To which I thought, ‘fuck you Toby, she says she’s not ready, doesn’t matter if it’s been 50 dates, dweeb noodle’. I was hoping that would be Kate’s response. Instead I saw her beginning to relent, under the supposedly ‘encouraging’ influence of Toby’s reassurances that he thinks she’s beautiful. Okay, but it’s Kate who needs to believe she’s beautiful, or that her weight doesn’t matter to HERSELF. That’s not going to happen just because some guy says it doesn’t matter, because he wants to get his end in. Toby, and the show, need to give Kate the time to truly be prepared to have a sexual relationship – if she even wants one, because so far all I’ve seen is Toby saying he wants one and Kate continuously saying she needs to work on herself and perhaps she’s not in the right emotional place for an intense relationship, but then relenting to TOBY’S wishes because he CONTINUES TO PRESS HER ON THE ISSUE even after she’s said no, thanks.

So I was a little icked out, but not giving up entirely because let’s see where this is going, right? 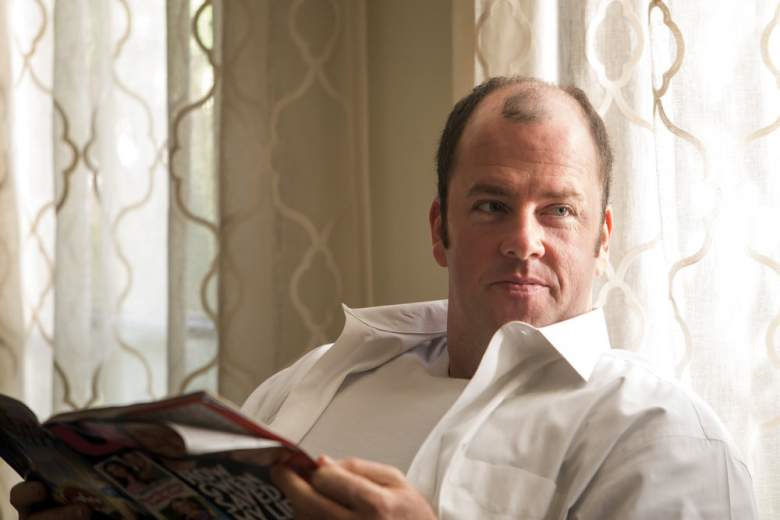 And then episode 3 people. Oi. He hears her singing in the bathroom, thinks she’s got a great voice (she does) and he immediately orchestrates an impromptu talent show for her down at the local nursing home so she can sing in FRONT OF PEOPLE even though she’s already told him she gave up singing in the first place because she no longer felt comfortable in the spotlight. Granted, a nursing home is hardly the spotlight, but it’s more spotlight than Kate had in her bathroom and he THRUSTS IT UPON HER unasked. He hires a limo to take her there and make her ‘feel like a star’ (note to show writers from a romance novelist: grand gestures like this are for the finale, not episode 3. What’s he going to do if he ever proposes? Force her to jump out of an airplane on live TV, because has no respect for her fear of heights or desire to keep a low profile?). Kate repeatedly says she doesn’t want to do it, why are you making me? and Toby simply refuses to stop the car. He doesn’t listen to her.

He DOESN’T LISTEN TO HER.

Kate sings, because she relents to Toby’s pressuring. She has low self-esteem, people. Of course she is going to relent in the face of a stronger, pushier person. She sings not because she wants to, but because she doesn’t know how to say no to Toby in a way that will make him acknowledge her right to say no. Because Toby is a bully who thinks he knows what’s best for Kate.

After Kate’s forced entry into the old folks home X factor, she and Toby are making out hot and heavy and Kate gets a call from her brother, who’s distressed and says he needs her. Kate says she has to go and Toby, the big baby, instead of thinking ‘oh boy this is sucky timing for my dick but hell, that’s her brother she’s talking to, that’s family and it might be more important than the fact I have an erection’, has a freaking HISSY FIT. He reminds Kate of the grand gesture he’s just made for her (Note: It’s not a grand gesture if you demand credit afterward), and asks her why she thinks he would do that (read: I did this to get sex and now we are making out and you DARE to put someone else’s needs above those of my ALL MIGHTY DICK??). His reactions suggests he now thinks he wasted his time organizing this whole thing for Kate because he didn’t get what he wanted out of it.

Where is the generosity here? Kate is glad (in the end) that she sang in front of the nursing home crowd and feels good about herself, but that doesn’t make the way Toby went about encouraging her to do it okay. And now, where is Toby’s happiness that Kate feels good about herself? Non-existent. He cares only about how her feel good reaction is going to benefit him. Then he dares to say the line I wanted to smash his face in for.

“I won’t play second banana to your brother”

Toby has known Kate for a few weeks. They haven’t had sex or made any commitment to each other. They are basically just dating, and in the early stages of what may or may not turn out to be an actual relationship. And at this early stage, he is already demanding to come first in Kate’s life (demanding and possessive—can you see the red flags waving in the hot air coming out of Toby’s blow hard mouth?). He wants to be put first above her TWIN BROTHER WHO SHE HAS BEEN CONNECTED TO SINCE SHE WAS AN EGG IN HER MOTHER’S TUBE.

Granted, Kevin’s crisis was lame and he was being a bit of a baby wanting his sister to help with it. But Toby didn’t know that. All he knew was that Kevin was in some kind of state and needed his sister, his twin, with whom he has shared all experiences since the beginning of his time on this earth. And Toby thinks ‘fuck that guy who is the most important individual in Kate’s life. I HAVE AN ERECTION!’.

I’ve known some sets of twins in my life and let me tell you one thing. If you’re in a relationship with one, you ARE in a relationship with the other. I’m not being menage kinky here, simply saying that twins have a particular connection that goes beyond a sibling connection. It’s unique and yes sometimes a little bit weird but it’s the strongest kind of connection between two human beings that I’m aware of. That’s just something anyone getting into a relationship with a twin has to accept. So if Toby wants any closeness with Kate, he’d better get to know Kevin and appreciate him because Kate is NEVER going to push her twin out of her life for some guy she’s known for five minutes.

At least I really hoped not.

But ugh. The show disappointed me by having Kate APOLOGISE to Toby for taking the call from her brother while they were kissing. To top it off, she agrees, at last, to the sex as currency to sweeten the apology. Toby NEVER apologizes for raising his voice and demanding ridiculous amounts of attention, and then he gets to have sex with Kate, which was his end goal all along. He is REWARDED for his childish demands, when in my opinion to the curb he should have been kicked. The ‘problem’ of Kate’s attachment to Kevin is ‘resolved’ (read: not resolved) by Kevin moving away.

I can’t even. This won’t work long term, because Kevin will always be in Kate’s life and Toby’s jealousy of that hasn’t been dealt with. And if Kate does decide to put Toby first, above her family… well that’s how unhealthy isolation in relationships start. No man should ever demand that a woman eschew her vitally important family (or friend) connections for the sake of his ego. It ain’t healthy, people. It ain’t romantic. It’s fucking toxic.

Ergo, Sami thinks Toby is a dick. So much so I made him this, so I wouldn’t have to use his picture as my featured image: 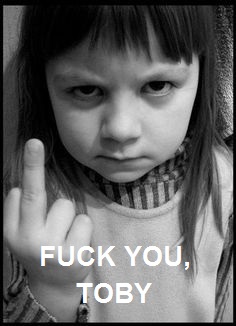 and the horse you rode in on

Always a pleasure coming here so I can ruin your favourite shows for you, isn’t it? :). But shit like this is just the kind of shit I’m sick of not calling out. I demand more from my stories. This is a great show marred by what I see as the celebration of a relationship where one person is demanding, babyish and more than a tad too controlling for my comfort. And the underlying message I’m getting (rightly or wrongly) is that Kate has to put up with this because she’s overweight and can’t do much better. You think J-Law would put up with this crap?

I don’t fucking think so.

I’d love your thoughts. Am I out of my mind?